2021 MRS Board of Directors 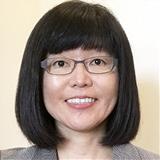 Kyoung-Shin Choi is a professor of chemistry at the University of Wisconsin-Madison (UW-Madison). She received her BS and MS degrees from Seoul National University in South Korea in 1993 and 1995, respectively. She then moved to the United States and received her PhD in chemistry from Michigan State University in 2000. After spending two years at the University of California, Santa Barbara, as a postdoctoral researcher, she initiated her independent research career as an assistant professor at Purdue University in 2002. She joined the chemistry faculty at UW-Madison as a full professor in 2012 and was a visiting scholar at the National Renewable Energy Laboratory in 2008.

Choi’s research combines solid-state chemistry, electrochemistry, and materials chemistry to address the fundamental challenges of designing electrode materials and electrocatalysts for electrochemical and photoelectrochemical applications. Specifically, her research group investigates electrodes and electrocatalysts for use in solar fuel production, biomass conversion, and (photo)electrochemical cells that produce both clean water and electrical energy. Her research projects combine fundamental and applied research efforts to bridge the gap between chemistry and engineering. The novelty and impact of her research have been well recognized, and she has received numerous awards, including a 2006 Alfred P. Sloan Research Fellowship, the 2007 ACS ExxonMobil Faculty Fellowship in Solid-State Chemistry, the 2010 Iota Sigma Pi Agnes Fay Morgan Research Award, and the 2015 Innovation Award from the Wisconsin Alumni Research Foundation. She has also been a devoted educator and received the 2008 Purdue College of Science Outstanding Undergraduate Teaching Award. In addition, she has been invited to give numerous student-invited seminars and lectures, including the Stanford Distinguished Women in Science Colloquia. Furthermore, Choi has actively participated in activities focused on the mentorship of underrepresented groups in STEM. This includes serving as a panelist for various forums to support underrepresented students/postdocs. Choi has been dedicated to developing new, commercially viable technologies, and has placed a particular emphasis on technology transfer. Over the past six years, the Choi group has filed eight patents and one patent on electrochemical biomass conversion was licensed by a company. She has also engaged with community partners (e.g. local companies and wastewater treatment facilities) to expedite the development of her water treatment technologies to create a more direct positive impact on the environment. Because of her breadth of expertise, she has been invited to serve as a scientific reviewer for various national and international research centers and institutes.

Her involvement with the MRS began in 1998 when she first attended an MRS meeting as a graduate student. She served as a student symposium assistant for a thermoelectric session and was awarded her session’s best poster award. Since then, she has been a regular attendee at the MRS meetings. Choi has organized two MRS symposia (2010 Fall MRS: Symposium on Solid State Chemistry and 2008 Spring MRS: Symposium on Crystal Shape Control and Shape Dependent Properties) and served as an organizer for the 2011 volume of the MRS Bulletin. Choi is also active in other professional societies and meetings. For example, she was the chair of the 2014 Gordon Research Conference-Electrodeposition. She has also assumed various service roles for the American Chemical Society (ACS), including serving as the the 2011 Chair of the Solid-State Subdivision in the Division of Inorganic Chemistry and as the Secretary-Treasurer for the Purdue Section of the ACS (2003-2012). She has been an Associate Editor for Chemistry of Materials since 2014.

My interactions with various scientific communities, and their continuous support have been instrumental to my professional and personal development. I have now reached a point in my career where I want to return the favor and offer my service to the organizations that have given me so much support. I had the privilege to be nominated to run for the MRS Board of Directors, which provides the perfect opportunity to give back to a community that shares my scientific vision. I believe that I am in a unique position to make meaningful contributions to the MRS for a few key reasons outlined below.

First, the MRS dreams of a world with a stable environment and abundant and clean energy and water. My research interests and expertise in solar energy, biomass conversion, and water treatment/desalination align perfectly with the MRS’s vision. Additionally, for the past six years I have been serving as an Associate Editor for Chemistry of Materials, a leading materials chemistry journal. As an editor, I am among the first to recognize emerging trends in materials research. With this knowledge, I can provide input to help MRS meetings and publications include visionary and cutting-edge topics in a timely manner.

Second, to have a vibrant and innovative community, the involvement of both academia and industry is essential. I have been actively involved in technology transfer, and the knowledge I have gained from these interactions has been invaluable to inform the fundamental and applied research that we pursue in my group. These positive experiences motivate me to be a strong advocate for increased interactions between industry and academia, which will benefit all members of the MRS.

Third, the MRS believes in diversity as it is the key that drives innovation, excellence, and scientific discoveries. Both scientific and demographic diversity are important. Because of my interdisciplinary research, I am aware of the trends and needs of various scientific communities (electrochemistry, solid-state chemistry, catalysis, inorganic chemistry). Therefore, I will be able to engage with diverse research communities to enhance the scientific diversity of the MRS. I have also spent half of my life in South Korea and the other half in the United States, and I have strong connections to both Asian and North American scientific communities. Additionally, throughout my career I have been an active participant in activities focused on the mentorship of underrepresented groups in STEM. Combined, my connections and experience will allow me to develop effective strategies to keep the MRS a highly diverse and inclusive society.