We stand with our colleagues in Ukraine facing danger, scientists in Russia opposing the invasion, and our members worldwide speaking out against the war in Ukraine—Carolyn Duran, 2022 MRS President

Since the invasion of Ukraine, materials scientists across the globe have been monitoring the events closely, supporting and assisting Ukrainian colleagues in any way they can, believing that it is important to protect researchers and their families.

Yury Gogotsi, MRS Fellow and Distinguished University and Charles T. and Ruth M. Bach Professor at Drexel University, notes that “many colleagues and classmates of mine spend nights in cold basements or bomb shelters and I get information about events there not from the television, but from dozens of messages and phone calls I get every day.” 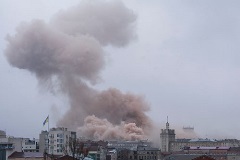 Inside the country, the National Research Foundation of Ukraine, which was founded in 2018 and only recently became fully operational, has seen many of its scientists leave to join the army, hide in shelters or leave the country. Over 250 projects meant to start at the beginning of March are now on indefinite hold, bringing unrecoverable harm to the Ukrainian science community.

According to reports, Olga Polotska, the head of the Foundation, spends her time during the day delivering food and supplies and her evenings in an underground bomb shelter, just like millions of other Ukrainians. Many research buildings across the nation have been damaged or fully destroyed, leaving the future of the scientific enterprise in the country in doubt.

Worldwide, there have been actions from professional technical organizations and scientific groups against the Russian government and associate organizations. As examples, several of Germany’s largest research funding organizations, including the German Research Foundation, announced its intent to halt all scientific cooperation with Russia. The group declared that research funds will no longer benefit Russia, joint scientific events will not take place, and that no new collaborations will begin. In the United Kingdom, science minister George Freeman tweeted that he had launched a rapid review of research-innovation funding from the United Kingdom government to Russian beneficiaries. And in the United States, the Massachusetts Institute of Technology has ended its relationship with the Skolkovo Foundation, a Moscow-based non-profit organization focusing on innovation.

“It is a human right for all people to be able to live their lives and pursue their livelihood inside safe environments,” said Sabrina Sartori, 2022 MRS Vice President. Amplifying the message, Carolyn Duran, 2022 MRS President stated, “We stand with our colleagues in Ukraine facing danger, scientists in Russia opposing the invasion, and our members worldwide speaking out against the war in Ukraine.”

Outraged by the actions of their government, thousands of scientists in Russia have condemned the war, and a letter organized by researchers and journalists in Russia has been signed by more than 5,000 people. The letter strongly condemns the hostilities in Ukraine and states that the Russian leadership has launched an unjustifiable war. Around 85 members of the Russian Academy of Sciences have endorsed this letter.

The Council of Young Scientists of the National Academy of Sciences of Ukraine is trying to convince international organizations to take even stronger action against Russia. More than 130 people have signed an open letter to the European Commission and member states of the European Union calling for an urgent suspension of all funding to, and international collaboration with, Russian institutions supporting the government.

Some ways that MRS Members and the community at large can support colleagues and their families in Ukraine include:

Image caption: An explosion from an air bomb in the center of the city of Kharkov, the metro station Constitution Square. Photo taken March 2, 2022 (By KMimages)

About the Materials Research Society

MRS is an organization of more than 11,000 materials researchers from academia, industry and government worldwide, and a recognized leader in promoting the advancement of interdisciplinary materials research and technology to improve the quality of life. MRS members are students and professionals hailing from physics, chemistry, biology, mathematics and engineering—the full spectrum of materials research. Headquartered in Warrendale, Pennsylvania (USA), MRS membership now spans over 80 countries, with 45 percent of members residing outside the United States.

MRS serves and engages members across generations to advance their careers and promote materials research and innovation. The Society produces high-quality meetings and publications, assuring that members of all career stages can present and publish their most important and timely work to an international and interdisciplinary audience. MRS continues to expand its professional development portfolio, as well as promote diversity and inclusion in the scientific workforce, with career services for researchers worldwide. The Society advocates for the importance of scientific research and innovation to policymakers and the community. And the MRS Awards program honors those whose work has already had a major impact in the field, as well as those whose work shows great promise for future leadership.

For more information about the Materials Research Society visit mrs.org and follow @Materials_MRS.