Excerpt from Stuff: The Materials the World is Made Of 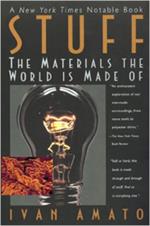 By Ivan Amato
Available from Amazon.com

Even though materials science and engineering has been a bona fide field of research for only a few decades, it has spawned a diversity of products, projects, and practitioners rich enough to populate its own version of the Serengeti National Park in Tanzania.

One of the very best times to go on safari is just after Thanksgiving each year. That is when (several) thousand materials scientists and fellow travelers converge on Copley Place in downtown Boston for the annual winter meeting of the Materials Research Society (MRS). They come from every state in the union, Tokyo, Kyoto, Seoul, Moscow, Berlin, Paris, Manchester, Zurich, Johannesburg, Bombay, Paris, and hundreds of other places. They come from universities, government labs, and industrial research facilities. High tech venture capital firms send representatives. Hundreds of companies eager to do some business set up booths and equipment in a massive expo complete with bowls of chocolate and attractive salespeople to lure potential buyers of mass spectrometers, nanoscopic ceramic powders, and the hottest new scanning tunneling microscope. This town size conclave fills entire hotels, overruns restaurants, and injects millions of dollars into Boston's economy.

Mostly, these masses come for a materials research show and tell nonpareil. They come to talk science, reunite with graduate school pals, gather intelligence about competitors, and to talk with long-distance collaborators. They come to buy and sell instruments, find jobs, and locate new sources of alumina powders for making refractory bricks or maybe isotopically purified methane for synthetic diamonds that are more perfect than any sparkling gem. Everything you always wanted to know about materials research and a thousandfold more can be learned during these weeklong pilgrimages. An MRS meeting is carnaval for the pocket-protector set.

Because advances in materials have had everything to do with general scientific progress no matter what the field, fair is a general celebration of all that science and engineering have wrought: the history of microscopy is partly a history glassmaking; the history of spectroscopy is partly a history of light-sensitive materials for the detectors; every computer controlled instrument in every laboratory owes a debt to semiconductor technology, which is as materials-centric as you can.

When MRS convention participants pay their registration fee, they get a telephone book of abstracts describing several thousand talks. At any given hour during the meeting, twenty- five different researchers will be talking simultaneously to audiences in twenty-five different meeting rooms. The technical torrent rages all week. Specialized thematic symposia run through the meeting like subplots of a play. The symposia become havens at which each participant can find his or her own familiar ground.

There are polymer specialists and synthetic diamond aficionados. There are users of molecular beam epitaxy machines who create new kinds of transistors and lasers on a chip by building up special crystals one atomic layer at a time. There are solid state physicists placing bets that crystals with "giant magnetoresistance" (materials whose electrical resistance changes sharply in the presence or absence of a magnetic field) are the key to next generation data storage and handling technologies. There is a perennial surfeit of researchers studying a class of ceramic superconductors that can carry electricity resistance-free at higher temperatures than all previously discovered superconductors.

There also are theoreticians sharing ways of coaxing more out of Schrodinger's equation or of Newtonian descriptions of molecular activity. They work in odorless laboratories awash in the glow of computer screens. Their equations are the wands with which they conjure up an endless vista of new materials that will lead to a technological landscape as far from today's as today's is from that of the early century.

There are researchers at MRS meetings who rhapsodize in minute molecular detail about designing new "energetic" materials, solids, and liquids that are good as propellants or explosives that pack ever Snore bang or thrust into smaller amounts (mind you, all of this has to be possible with minimal danger of accidentally exploding the stuff during preparation and handling). You won't hear the most secret stuff about energetic materials since the doors of an MRS meeting are open to all registrants regardless of their security classifications. But there areø other meetings organized by organizations with names like the National Defense Preparedness Association where participants need security clearances and the doors are guarded.

Still other research tribes at an MRS meeting obsess about safe ways of perpetually entombing radioactive waste into glassy materials that can take the bombardment of radioactive slings and arrows for millennia. Another group aims to emulate the arachnidian silken feats of natural polymer engineering and use them to make what they call "biomimetic materials." For this tribe the exoskeleton of a bess beetle could well provide the key to a new generation of aircraft: lighter-weight, more resistant to damage, and harder to detect.

Yet amidst the apparent mishmash of tribal differences lies that unity of thought and action that Northwestern University's Morris Fine had seen even in his Bell Lab Days in the 1940s. It is the same conceptual unity that provided the very impetus for the birth of the original Interdisciplinary Labs (IDLs) at Northwestern, Cornell, and the University of Pennsylvania and for the founding of the Materials Research Society itself.

As Fine pointed out years ago, materials research is not just chemistry or quantum theory or solid-state physics or process engineering or marketing. It is all of these as well as any other way of thinking that helps reveal how the structure, properties, performance, and processing of materials relate to one another, to technology, and societal needs. The founders of MRS knew that the IDLs were merely a start. The age-old disciplinary segregations would not buckle easily even with new academic structures such as the IDLs in place. The founders of the MRS wanted to create another kind of forum beyond IDLs at particular universities; they sought a more general infra-structure for changing attitudes, a task as daunting as any technical challenge.

Materials researchers have developed a collective insight into the ways of materials that often even astounds themselves. Their scientific conferences have become show-and-tell marathons in which researcher after researcher, in darkened hotel meeting halls, flashes annotated series of slides depicting exquisitely detailed data and images about a material's structure, functions, and place in the technological world. Many of these slide shows end up winning the attention of only a handful of like-minded specialists. Most quietly recede into oblivion. Some, however, take root and even grow into great branching subdisciplines. And some of these trigger research wildfires that change the world.

Excerpt from "Stuff: The Materials the World Is Made Of", Chapter 5, by Ivan Amato, Published by BasicBooks, a Division of HarperCollins Publishers, Inc., 1997. With the author's permission.