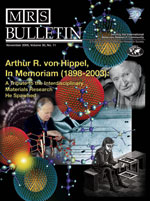 Below are the tribute articles that appeared in that issue.

This article examines the role that Arthur von Hippel played in magnetism work in the 1950s. (John B. Goodenough)

Arthur von Hippel: The Scientist and the Man (PDF)

This article shows the personal and professional contexts within which von Hippel—the namesake of the Materials Research Society's highest award—emerged as a scientific leader and role model of interdisciplinarity, as seen through the eyes of his son, Frank N. von Hippel (Frank N. von Hippel)

This article celebrating Arthur von Hippel's career considers the expanding frontiers in the field of biomaterials, a subject that intrigued him given his interests in the molecular engineering of materials. (Samuel I. Stupp, Jack J.J.M. Donners, Liang-shi Li, and Alvaro Mata)

Ferroelectricity: The Foundation of a Field from Form to Function (PDF)

Highlights the major role Arthur von Hippel and the Laboratory for Insulation Research at the Massachusetts Institute of Technology played in the early development of the field of ferroelectricity in mixed oxides with the perovskite structure.(R.E. Newnham and L. Eric Cross)

This article covers the major developments and players in semiconductors from their early discovery and understanding, in the context of von Hippel's seminal development of the interdisciplinary approach to research and its impact on the field. (Alan B. Fowler)

The Molecular Designing of Materials and Devices (PDF)

Arthur von Hippel had a great goal: "the molecular designing of materials and devices." This article describes how computational materials theory has evolved over the last half century, helping to transform that goal from dream to reality. (Morrell H. Cohen)