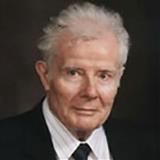 David Turnbull (1915-2007) was a towering figure in materials science. The David Turnbull Lectureship of the Materials Research Society is named in his honor. He distinguished himself in many areas of materials research including kinetics to crystal nucleation and growth, diffusion in metals, and glass formation. Among his numerous honors and awards were the MRS von Hippel award in 1979 and the Japan Prize in 1986. The MRS Turnbull Lectureship was established in 1992. Turnbull passed away on April 28, 2007, but his legacy lives on in all his published work as well as through his students, associates, and colleagues, and through the tremendous volume of work within materials science.

By Michael J. Aziz, Harvard University, prior to the David Turnbull Lecture by R. Ramesh at the 2007 MRS Fall Meeting.

Some Thoughts on Directions in Materials Science (PDF)